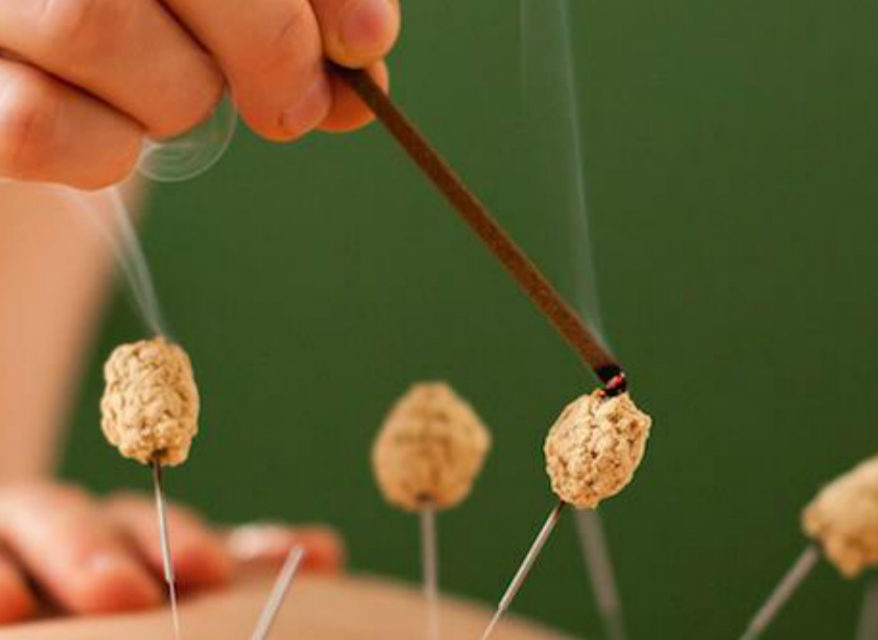 Moxibustion is a form of heat therapy in which dried plant materials called “moxa” are burned on or very near the surface of the skin. The intention is to warm and invigorate the flow of Qi in the body and dispel certain pathogenic influences.

Moxa is usually made from the dried leafy material of Chinese mugwort (Artemesia argyi or A.vlugaris), but it can be made of other substances as well.

What exactly does the practitioner do?

In the U.S., practitioners generally hold a burning moxa stick close to, but not touching, the surface of the skin.

In this method, the moxa material is compressed into a stick or pole, looking not unlike an oversized cigar that can be lit and allowed to smolder, producing a unique form of very penetrating heat.

The smoldering moxa stick is held over specific areas, often, though not always, corresponding to certain acupuncture points. The glowing end of the moxa stick is held about an inch or two above the surface of the skin until the area reddens and becomes suffused with warmth.

What can I expect to feel?

It is not uncommon for patients receiving moxibustion to report a sudden flooding of warmth that quickly radiates along a specific pathway (usually corresponding with the jing luo channel that is being treated) away from the site of application. This is a good result, as it indicates the arrival of the Qi and signals that the flow of Qi and xue has been freed in the channel.

When is moxibustion used?

Moxibustion is used for:

Practitioners often do both acupuncture and moxibustion in the same clinic session when appropriate to the diagnosis and treatment strategy. Practitioners believe that the therapies increase each other’s effectiveness when used together.

Unlike acupuncture, which is almost always done by a trained practitioner in a clinic setting, moxibustion can be easily used at home. It is not uncommon for Chinese medical practitioners to train their patients to use moxa on themselves to strengthen the effect of the clinical sessions between appointments.

There is a small inconvenience associated with moxibustion: the smoke and odor. Although there are so-called smokeless varieties of moxa, the preferred true moxa (made from mugwort) does produce a lot of smoke when burned. Most TCM clinics are well equipped with a good ventilation and air purification system, so this is not a big problem.

However, the lingering odor produced from burning mugwort unfortunately smells somewhat like marijuana. Most TCM practitioners in the United States, place small signs around their office informing patients and visitors about the true nature of the odor that they may be noticing.